An interesting thing these aliens…

I do believe in aliens.  “How can you believe in aliens if you are a Reformed Christian?” you may ask.  (Reformed Christians find themselves in the conservative-logical camp, and alien-believers tend to be “wackos.”)  Here’s why:  From accounts of contact victims, the “aliens” themselves admit that people in ages past used to call them devils, goblins, trolls, and demons.  This kind of contact is something that has gone on for centuries.  And it is as real as pigs on a hillside.

A pastor friend of ours, Mark Hitchcock, wrote a book called Extraterrestrials.  It’s a fascinating book. He researched the “phenomenon” from a Christian perspective.  And that opened my understanding into something I used to excuse away as “hallucinations” or “attention-mongering.”  But what I came away with, from the book, are some simple conclusions about aliens, and about alien-abductee/sighters.

2.  Abductees often have dabbled in the occult or have a preexisting fascination with aliens or occultic matters.

1.   Aliens are generally seen at night in lonely places.  The time when darkness and fear reigns.

2.  Aliens seek to demean mankind.  The ‘message’ that people are given is that mankind is backward, mankind is inept, mankind is doomed to failure.  The ‘experiments’ on mankind accentuate this view.  Here are some secular records.

3.  Aliens seek to instruct mankind, their most common message being, “There is no God, and Jesus Christ is not His son. Worship creation instead.”  Here is a “released top-secret message” proported to be from space.  (Here is someone trying to decode it).  What does it say?  If it is from aliens*, it will directly deny the importance of Christ.  No, nothing against Muhammed or Buddha.  Ever.  What does this mean?

4.  Alien technology is never ahead of “cutting-edge” human technology.  In the 50s, abductees were shown banks and banks of “magnetic tape drives,” while modern abductees see things they consider top-line: lasers, 3D images, flatscreens.  Aliens are not creative, but can only draw upon the creative nature of man.

1. On a lonely road, or alone in the room (usually no witnesses)

6. Aftermath, another ‘convert’ to the anti-Christian message

What Does this Mean?

Again,  From accounts of contact victims, the “aliens” themselves admit that people in ages past used to call them devils, goblins, trolls, and demons.  Aliens are what the Bible calls “demons” and “false gods.”

One-third of the angels fell with Satan, and as their prince is ever-seeking for prey, so are they: “Be sober-minded; be watchful. Your adversary the devil prowls around like a roaring lion, seeking someone to devour. (1 Pet 5:8) 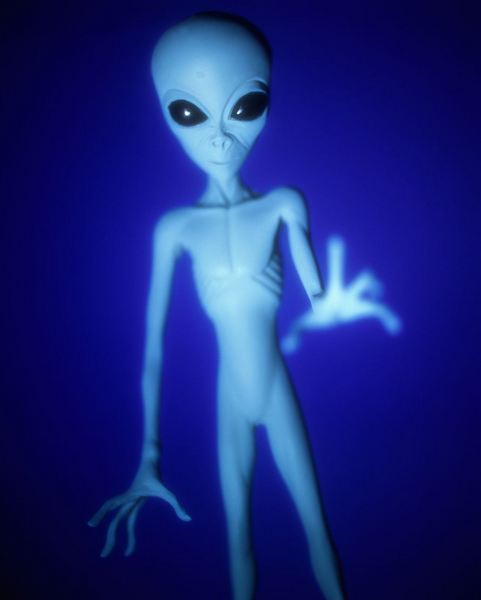 The picture of an alien etched into our corporate subconscious is one of an alien reaching out and summoning. What is interesting about this is that all people (secular accounts/pre-Christian accounts) who experienced abduction had to AGREE to the abduction, or to the first experience:  “Come.”  Aliens (demons) seem to be limited by human volition. (I will not call it “free will” since only Adam and Eve’s will was that free to not be swayed by inherent rebellion against God or desire for sin.)

That these “visions” are connected with the occult, and the pursuit of magic and alchemy, can be seen in a close-encounter that Zosimos of Panoplis had in 300 AD. Again, during sleep.  Again, a lesson to be learned: distract the man to worship and seek the power-in-the-natural world.

Just like the Explorers of the New World, who invaded with the message of Christianity, the MO of these “distant-traveling” aliens seems to be Evangelism.  But the message is defensive:  anti-Jesus.  (By the way, isn’t it interesting that this is also the message of “Hollywood”?)

Hollywood promotes the idea of a super-race of aliens “helping” or “ruining” our world.  Scientists without Christian insight have only their own senses to use to judge this invisible realm. Without insight, the fears of ghouls, goblins, trolls and aliens can make even intellectuals “panic.”

For a deeper and very articulate explanation of the motives of aliens, see UFOs and the Christian Worldview.

Chuck Missler, in his book, Alien Encounters, poses the riddle this way: “Why would all these hordes of E.T.s cross time and space simply to teach New Age philosophy, deny Christianity, and support the occult?”

The answer is that they have not traveled all that far, and their purpose is to pull people from Truth in Christ and Obedience to God.  Rebellion and worship of the Created rather than the Creator.  This is what Baal and Asherah and Moloch encouraged in the Israelites.  Question for us all: “Are you worshipping (serving, sacrificing for, living by principles of, obeying, preaching about) the Creator, or are you worshipping something in this world?” Another way to avoid aliens is to not be a threat to their message.

An organization called Alien Resistance has sought to help free those stuck in alien-contact.  They claim that there is only one thing that can stop for sure an “alien abduction attempt.”

Abductions can be permanently halted by one thing and one thing only: the name of Jesus.

They say this is not a ‘magic formula’ but it is the act of faith, of one calling out to the ONE who has power over heaven and hell, who is our shepherd-protector.  And of course, the story of the “cleaned out house” warns us that if you are having this trouble, and are wanting to be freed, you had better be darn certain your house has a new owner.

Here are some records of people who have been freed from the cycle of alien abduction.

And what does this have to do with Soli Deo Gloria?

The dark world with its SYSTEM– the kingdom of this world– attempts to blot out Christ, as one might attempt to blot out the sun on a bright day.  “Sunglasses” and “sunshades” include ideas such as relativism, alien-fascination, and earth-worship.  But this world was created foremost for the glory of God.  Surely you have seen it in the daily miracle of a sunrise, or the pattern of the stars on the dark summer skies.  “Deep calls to deep in the roar of your waterfalls.”  Our soul hears the voice of Creation praising its maker.

I don’t know about you, but when I think of the power of the name of Jesus in combatting such a scary force, I get goosebumps.  Even these “aliens” bring glory to God, because their loss of power testifies to Christ being the WORD by which everything in the universe was made.  The created must bow to its CREATOR.

Everything, even “aliens,” exist for the Glory of God.  Soli Deo Gloria!

* Note: as I was reading this “received alien message” page online, Google Translate offered to translate the document into Hungarian.  It begs the point that a message like this is considered to have the letter-sound-meaning connection of an ABC alphabet.  If you consider Egyptian hieroglyphs and the amazing Chinese script, you have to laugh at the presumption that aliens have an ABC based language.  Unless of course, they could not “create” their own alphabet.