Abortion on the DECLINE?

According to the statistics, abortion is on the decline!

I recently came across pro-choice material on Quora claiming that the decrease of crime since the 1960s is directly related to the increase in abortion options. Some studies seem to point to this.

The underlying theory rests on two premises: 1) unwanted children are at greater risk for crime, and 2) legalized abortion leads to a reduction in the number of unwanted births.

Which sounds plausible. The author continues:

Donohue and Levitt (2001) report a number of pieces of evidence consistent with a causal link between legalized abortion and crime, a hypothesis that to my knowledge was first articulated in Bouza (1990). The five states that allowed abortion in 1970 (three years before Roe v. Wade) experienced declines in crime rates earlier than the rest of the nation. States with high and low abortion rates in the 1970s experienced similar crime trends for decades until the first cohorts exposed to legalized abortion reached the high-crime ages around 1990. At that point, the high-abortion states saw dramatic declines in crime relative to the low-abortion states over the next decade. The magnitude of the differences in the crime decline between high- and low-abortion states was over 25 percent for homicide, violent crime and property crime. For instance, homicide fell 25.9 percent in high-abortion states between 1985 and 1997 compared to an increase of 4.1 percent in low-abortion states. Panel data estimates cofirm the strong negative relationship between lagged abortion and crime.

(from Understanding Why Crime Fell in the 1990s: Four Factors that Explain the Decline and Six that Do Not by Steven D. Levitt)

The statistics do indeed show a SIGNIFICANT decrease in crime since the 1990’s. But, what the above-mentioned article is unable to explain is the DYNAMIC INCREASE in crime just after abortion was legalized. The 1960-1990 increase puzzles even researchers. 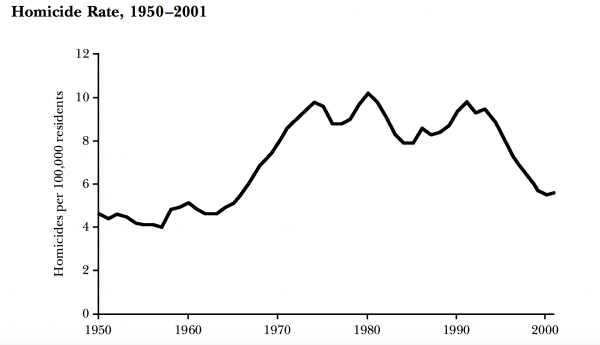 Not only homicide. Robbery, rape, assault, larceny, burglary…ALL these are in steep decline (since the 90s). Almost at the rate they were before the 60s.  Is the decline due to abortion? Impossible. As the abortion chart shows, something significant changed the US crime statistics. Note, these are percentages of the population, not total numbers. (Do your own research on this here).

What is happening? What happened in the 90s to PIVOT the nation in crime and abortion?

My first suspicion is a new methodology of counting statistics. Maybe they changed the markers. The article by Levitt above discusses other factors like increase of police force, more incarceration, gun control. It is a fascinating study. But my suspicion is incorrect. Even law-enforcement notice the difference. No matter how you play the statistics, you cannot connect abortion to causing that decrease.

ACTION POINT: Do you have an idea about this? What happened in the 90s? Please COMMENT below.