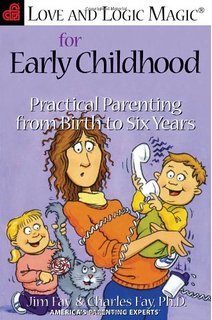 I recommend the Love and Logic program. Before we used this program, we had a lot of trouble in the management of our children. But incorporating the principles behind this has enabled us to see obedience in a different way. Love and logic works on the principle of reasoning with your child. Letting them have choices that are within your acceptable framework.

Do you want bananas or strawberries on your cereal?

Do you want to wear this shirt  or that shirt?

Do you want to go to the park or the museum today?

As they get older, the choices get more complicated.

Do you want to do your homework before dinner or after dinner?

Do you want my suggestions for how you could do better on your homework?

The principle is to teach the child to make decisions. And let them fall.  When kids are small, their falls are much smaller. If they learn to crash their bike or fall off the playground equipment, they are developing not only physically–learning how much tighter to hold on–they are also developing the awareness of what will happen if they do not master that skill.  Because the negative is they don’t learn the pain of falling until they’re zooming down the road on their motorcycle. Big falls are much worse. Let them fall and make the wrong decision while the cost is small.

The important thing in this system is to give them a million choices that don’t matter, so that when it does matter you have the freedom to say, “I give you many decisions to make all the time. This is going to be my turn to make a decision.” For example, when your child could fall very far and get very hurt, that would not be a ‘your choice’ time.  It’s a parental choice time. If they are used to having freedom with the choices YOU give them, the choices you’ve already filtered through, then actually anything they choose is okay with you already.

One more point. Learning to live with the results of your own decisions is a part of growing up. If the decision works or doesn’t work. While children easily want to make choices, their own reasoning through options is not always spot-on. This is why choices should be filtered through parent-permissible options.  The bigger the child gets, the less you give them choices. Instead you ask, “What are you going to do about it?” Keeping the monkey off your back.  If they’re stumped, you can ask them, “Would you like some suggestions?” Then you give the choices.

I recommend reading the books.

I looked at The Facade on two levels. The first is the storyline and craft. I am glad to have read this book. It presents a fictional scenario for the alien/demon connection in end-time events. I was engaged completely in the storyline. The plots and subplots worked well, and I especially liked how the documentation of the Roswell/Paperclip/experimentation theories worked into the plot but also informed the readers. The final scene persuaded me to not buy the sequel.

The second level I want to address is the message. The book presented the view of demons supported by church fathers in the early years, namely that demons were unholy offspring of angels with women. This is unsupported in Scripture. John Calvin addressed this idea in his Genesis commentary: “That ancient figment, concerning the intercourse of angels with women, is abundantly refuted by its own absurdity; and it is surprising that learned men should formerly have been fascinated by ravings so gross and prodigious.” When you start to bring into the dialogue extra-biblical sources, you compromise the principle of Sola Scriptura and open yourself up to misunderstanding and heresy.

Another and stronger objection I have to the message has to do with a premise that is unfounded: demons killing Christians, directly. Men can kill Christians. Demons no doubt have given rise to all the persecutions of Christians since Stephen. Demons can stir in men the desire and malice to kill. But to give a freedom to demons in fiction that they do not have in life undermines the victory that Christ wrought on our behalf (and undermines the integrity of the book’s premise). Christians are immune from them. And Christians are safe under the hand of a God through whom every demon must get permission for any act, i.e. the Book of Job.

The reason Scripture is void of any but a cursory explanation of the hierarchy or inner-workings of the demon world, is that it is God’s business. How he uses angels or manipulates demons in the answer of our prayers is a mystery the Bible clearly leaves unanswered. It is not really important, in the big scheme of things. We may wonder. But the obvious silence on the matter means that there are more important things to be thinking about. Our business.

Not, is a demon on my shoulder whispering for me to commit adultery, but rather, “God, give me help to overcome this temptation!” Not, what demon is blocking our church’s evangelism efforts, but rather, “God, bring salvation to our town. Give the believers strength and wisdom in their evangelism.” We should not give undue attention to the demonic realm. We should know it’s there, and remember “greater is He that is in me than he that is in the world.” So even if we come across someone that is demon/alien-possessed, we address Christ in the matter, “Jesus, I ask you to free this man from his chains.”

The most important point to remember is “undue attention” is what the prince of demons wanted in the first place, why he fell. My biggest problem with The Facade is that there is no Jesus Christ whose death brought victory and safety to his bride. The cross did nothing, in this scenario.

I recommend reading The Facade, and then following it up with this book, Chuck Lowe’s Territorial Spirits and World Evangelisation.

A quote from the above book says regarding Paul, in his epistles of Ephesians and Colossians, “First, he insists, the power of Satan has already been decisively broken …. We need not fear Satan’s power: Christ has much greater power and far higher authority …. Nor need we fear Satan’s vengeance …. Nor need we fear Satan’s dominion over the world …. Secondly, all this was done without our help or involvement …. The war has been won, and it has been won without us” (p57).

The main character of The Facade, Brian, is supposed to be a Presbyterian. He would have known this if he were a catechized Presbyterian. I agree that aliens are demons in modern garb. It’s great that this has been tackled in a religious scenario. However, the fiction it is preaching alongside the real facts of the alien “problem” creates a heresy. It declares that the author does not fully understand the implications for Christians in this field.

The testimonies of former victims on the Alienresistance website, praised in his acknowledgements, should have been enough to teach the author that the only way to rid oneself of alien influence is the name of Jesus.

1.  All students and parents should have a content filter/accountability system.

Our family’s favorite is Covenant Eyes which allows for age-appropriate content filtering. The program also saves a searchable record of all internet activity. We all get pulled astray. It’s a fact of nature, and accountability is a strong method to counter our nature.  Covenant Eyes will not allow the internet to open without logging in, and after it logs in it records all sites and pictures viewed. Each child can have their unique login information and filtering options.

(I’m so confident about Covenant Eyes, I’ve asked to sponsor them on my website. So, although I may get a kickback if you join through these links, I only tell you about it because I believe it is essential for every family to use).

2. All students should be taught about online predators and dangers.

My children were required to become “certified to use the internet” by going through NetSmartKids web materials, which have materials for younger as well as older children.

3. All students should know how to recognize credibility of a website.

History research requires credible sources, so fan-sites and armchair historian sites are not as valuable and most often have no unique primary sources for you. When you do a Search online,

It should have a short web address. It should probably end with .org instead of .com, though that is not always an indicator. Free sites are always suspect.

*It should have a site name that is specific to history. Museum sites. Academic sites.  Reading the blurb that shows up on the search page can show you the type of site you will be visiting.

If you see a site with a lot of ads for random products, not related to history, you should suspect the site, and move on to another site. Website owners whose main purpose is revenue will sell space on their page that filters information according to YOUR previous search history, showing your personalized ads. This reveals that the purpose of the website is to sell, not to inform, thereby undermining academic credibility.

BUT If the ads are directly related to the material presented–specifically recommended books on the topic, articles to download, materials that will help you–you may consider purchasing them and supporting the site’s owner whose primary purpose is to inform.

*Avoiding blogs and forums enables the finding of credible sources

Not very many people make it their intention to connect students to primary source information on history.  Because of this, blogs should be avoided.  Forums are opinion-driven sites, and very rarely will you be using your time wisely when you spend time skimming forums.

The following book report format template is appropriate for students at the pre-college level who are required to write a report about a book they have read. For the type of book summaries applicable to college and university level (undergraduate and post-graduate), as well as for business and professional situations, you can check out the following book summary sample.