Me? I do not believe in God.

I do not believe He made the world.

I do not believe Jesus died on the cross.

I do not believe he rose from the dead.

Why don’t I believe in these things? Because I reasoned them through. And I know they are true.

It is through REASON that I have come to KNOW that GOD IS. Through plain old common sense I can see the WORLD was created by His design. I don’t need to have some invisible faith to use my brain!

The death and resurrection of Jesus are also plain to an historian. Only approaching it as I approach any other event in history, I can see he died and he rose. I know He died for the sins of the world, because I approach it through reason. Evidence.

Natural Theology is how reason, the intellect, common sense and science work together to show us these things clear as day. I don’t need to hide behind the Bible.

There are only TWO WORDS I have to believe in.

These are the hardest words.

We don’t have faith

That is not faith. These there are also clear through reason.

If you take the time to think about it.

Let my FAVORITE TEACHER walk you through it, without requiring belief in the Bible… 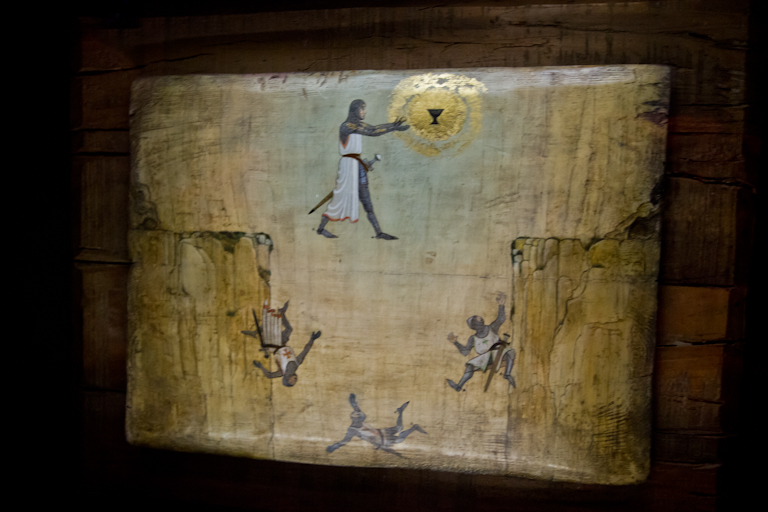 When we say we are saved by faith, Sola Fides, we mean…

It does not take WORKS.

We do not have to achieve perfection, or sinlessness before we can approach God. Not only that we do not have to, it means we couldn’t if we tried.  We could never meet the righteous requirements of God’s law.  Conscience and earthquakes prove that we’re broken and the world is broken.  It’s not the way it should be.

It does not take INTELLECT.

If we could be saved through intellect, only the smart people would be saved.  So God evened the playing field by having salvation through faith alone.  A child or an adult.  A genius or a mentally handicapped person.  A reader or a non-reader. Salvation is free to all, based on faith alone.

But the phrase “Sola Fides” means that some volition is required. We must use our minds before it can reach our hearts.

“Come now, let us reason together, says the Lord:
though your sins are like scarlet,
they shall be as white as snow;
though they are red like crimson,
they shall become like wool.”  (Isaiah 1:18)

It does take thinking through a QUESTION: Was it FOR ME?

Objections to it being FOR ME:

It can’t be for me. What about Good People who never hear??

Many people deny that it was FOR THEM because they let go of reason when it comes to others. “If it is not FOR THEM too, I won’t have it,” they say. If God doesn’t let everyone in, he’s not fair.

Foolishly, they exchange REASON for an unproven faith in the inherent goodness of men. Do you really KNOW that mankind is inherently GOOD?? We WANT mankind to be good. But are we good at heart??

How do you explain conscience? Why did God put conscience into man? (If not God, where could such an immaterial alarm come from?) Why put a constant alarm when we cross the line? Why put an alarm unless there is a consequence for not obeying the requirements of God?

We are created equal. Very true. We all have equal access to Truth. Otherwise God’s judgment would not be fair or right. But unless persuaded by reason and common sense, people do not want the cross to have happened FOR THEM.

It’s a hard pill to swallow.

I want my goodness to be good enough. I’m as good as the next guy, so there you have it.  I don’t need anyone’s help.

If you think about it, only perfection could be allowed eternal access to God (or his presence would be tainted). And justice requires condemnation of all sin (or he would by his disregard be accomplice-before & after-the-fact).

Will you be one who thinks it through to the end?  Reason echoes it across time and space, and it so happens that the Bible agrees.

“For by grace you have been saved, through faith. And this not of yourself. It is the gift of God, not by works, so that no one can boast”  Eph 2:8-9

Update (3/1/20)
I just came across this quote by Martin Luther where he says the same thing, in different and more eloquent words…

Who is this “me?” The beloved Son of God gave Himself for me, a most miserable and condemned sinner. If I could by means of any work or merit love the Son of God and come to Him, why should He given Himself as a sacrifice for me?
…because there was no price under heaven and earth for my release except that of Christ the Son of God. Thus it was supremely necessary that He gave Himself for me. What’s more, He did it all from His inestimable love, for Paul says, “Who loved me.”
Everyone who can say this word me and make it his with firm faith and confidence together with Paul will be a good lawyer against the law, for He did not give sheep, bulls, gold, or silver, but God Himself in all His divinity. He did it entirely and fully “for me.” Yes, this “me,” a miserable sinner under condemnation.

-Martin Luther, Commentary on Saint Paul’s Epistle to the Galatians (1535)

IN THE BOOK: TRUNK OF SCROLLS.

Marcellus and Byziana struggle with what God requires from us.  Does he want sacrificial acts, like standing on pillars?  Is this what pleases God?  In the story, they learn about faith, and how faith working with reason results in our actions and in our relationship with God. They learn this through the power of the Scrolls in their life.