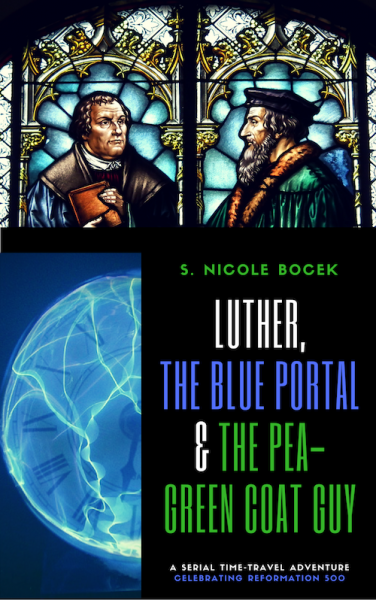 What most of us do not realize is we are either slaves to our idol factories or friends of God.

Amber traces the outline of Martin Luther onto the pumpkin. Nonetheless, she continues. After finishing the outline, Amber puts the pencil down and takes the paper off. This looks nothing like Luther. Amber grasps the knife. Just as she begins the carving out process, her phone rings. Wiping her hands on a towel, she looks at the caller ID. Lacey. Amber taps the answer button and presses the phone to her ear.

“I’m carving a pumpkin.” Amber hesitates. Invite her. Now. “Say…are you doing anything on Wednesday?”

There’s a moment’s silence and then Lacey comes back.

There’s another long silence. Amber waits for what feels like an eternity.

“You know…I just remembered I actually have a Candy Crush tournament with an online friend…um…maybe another Wednesday?” Lacey says hesitantly.

Amber’s heart aches, but she says nothing of the brush-off. “Okay.”

They talk of unimportant things, then Lacey says bye and hangs up. Amber groans, wanting to bang her head on the table. Once again, guilt overwhelms her but she tries to shove it down and continue carving. Gah, this looks nothing like him.  I need a break.

Amber sets the knife down and enters in the next date. 1666, Bedford England.

Amber appears on all fours in an alleyway on a wet puddle. It’s dark. She lifts her hand, catching the scent of metal. Amber stands up and walks away, wiping her hands on her jeans. Something trips her and Amber sprawls on the ground. Scrambling to my feet, Amber notices it’s a body. What? The body isn’t moving. The sharp, metallic smell only becomes stronger.

“Stop where you are!” a loud voice rings out. “Murderer! Murderer!”

“Put your hands up!”

Amber puts her hands up, confusion filling her mind. What’s going on? What’s happening? Why is there a body? There is no where to run, and she is still in shock.

The men tie her hands together and lead her away. Dawn is breaking and Amber sees her hands and jeans covered in blood. Bile rises to her throat but she swallows it down.

“Where are you taking me?” she whispers, hands shaking.

“You’re going to jail,” the man growls. “How could such a young thing like you be such a heartless murderer?”

“I-I didn’t do anything!” Amber protests, struggling a little.

The man jerks Amber into a small building.

“Lock her up with the others,” someone orders.

Amber is taken downstairs and to a prison. The man opens a cell door and shoves her in. There’s already a man inside, sitting at a desk and writing down something in a book. I’m sick of this. Amber sits down in the corner and groans. The man at the desk glances at her.

“They think I killed that guy. No, I’m not okay. And my name’s Amber,” she added, not bothering to ask for his name.

Amber nods and looks at the high small window. The bars are thick.

I gotta get out of here and find—

The man’s name sinks into her mind. She gazes back at him, eyes wide.

Bunyan gives Amber a confused look. He glances at his writing and back to her.

Why would the Pea Green Coat Guy—Zeff—want me to meet John Bunyan?

This was uncanny. Last year for Thanksgiving Mother had given her a really nice old-looking copy of the book.

“I hope you will treasure this story, Amber,” she had said.  “For the early settlers of America, that book was second to the Bible. It came out just after Plymouth was settled.”

And hadn’t Father said that the truths of the Reformation were wrapped up in that little allegory? Does Zeff know about this?

Bunyan interrupts her thoughts. “You know of my story? May I ask how? As far as I know, it’s still in my head and on my desk.”

“Word…gets…around?” She looked at her watch. Is this about Lacey?

Bunyan looks at her.

“Yes, I am. The pastor of Bedford church.”

“So…I guess, in light of your book…what would you say about my friend Lacey? I want her to know about Jesus. And I feel guilty about not telling her. But all she does is sit around and play Candy Crush on her phh—ph…” Amber catches herself. “You know, Candy Crush.”

Bunyan stares at her and clears his throat.

“So she is a confectioner?”

“Her work gets in the way. I understand what you mean. She ignores her soul.”

“In that case, if I were to categorize her, I’d say she’s like a fellow I know, named Ignorance. Or maybe like Civility.”

She strains her mind to recall.

“Let me tell you my story,” he starts, putting his quill down. 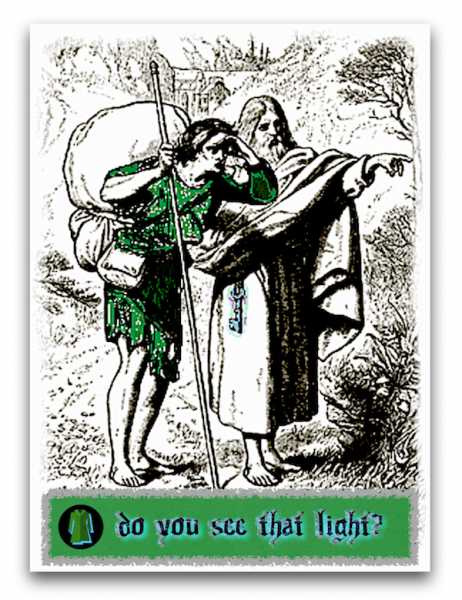 She nods, settling in place on the ground.

“There is a man with a terrible burden on his back. His name is Christian. He lives in the City of Destruction with his wife and two kids…”

Amber listens intently to him talk of the scroll and the burden, even though she already knows the story. His voice is full of energy.

“…Christian meets up with another man on a hill. This man’s name is Mr. Worldly Wise. He tells Christian that there is an easier way to get rid of his burden. The way is by going up to a city where a man named Mr. Civility can cut the burden off. Do you know what’s wrong with this?”

Amber nods. “There can only be one way to get the burden off. Christian has to go all the way to the Place of Deliverance. ‘Cause there, God will forgive him and his burden will roll away.”

Bunyan smiles. “You sound like you’ve read my manuscript. But yes. However, instead, Christian goes off the path. He goes toward the city on the mountain. Your friend, Lacey, is climbing that impossible mountain.”

Amber tilts her head, chin on her hand.

“She is letting the world carry her away to a place of destruction.”

Nodding, Amber recalls the story. “The door in the hillside.”

“On the other hand, she could be like Ignorance. He keeps walking the path, though Christian tries to tell him he needs to have a scroll, which he will get at the cross. But he disregards the warning, and denies he needs it.”

“That’s her, too! She doesn’t know. Not really. And she’s satisfied with just moving on without thinking about it.”

“Sweet sister, without Jesus, your friend will not be let in to the Celestial City. She will have a rude awakening on that day, unless—”

“I know,” she replied. “Unless I help her to understand.”

Amber stands up, worry for her friend overwhelming her. “I have to tell her!”

Bunyan smiles again. “Guilt is not what pushes us to share with our friends, Amber. Paul said, ‘the Love of Christ compels us.’”

“Right.” The world spins around her and the cell disappears. Amber appears back in her room.

Oh no! Pastor Bunyan saw me disappear! I hope he’ll think it was a dream.

“Dad! Dad!” She runs downstairs. Her mind is filled with the adventures of the past weeks. Father is listening to a radio talk-show, so he holds up a finger for a moment as he pauses his smartphone. She overhears someone say,

“The heart of fallen man is an idol factory. The desire to worship is still there. We’ve turned away from the one who created us to things and creatures, even to ourselves.”

The words make her stop. “Daddy, what did he mean? Idol factory. What’s that?”

“Calvin said that. The White Horse Inn is just talking about how we all worship—but what we worship depends on what we know about Truth.”

His words pierce to the heart. “I want Lacey to know Truth, Daddy.”

“Have you prayed for her?”

She shakes her head, no.

“I’ve invited her to Bible Study on Wednesday, but she’s too busy with Candy Crush. She preferred a Candy Crush tournament to going to church with me.”

“You see the idol factory at work?”

“How do we change her heart? How can we get her to listen?” She chews on her lip then adds, “You know how Ignorance in Pilgrim’s Progress didn’t listen to Christian? It’s like she just won’t hear me.”

“Only God can change her heart.” He pulls her to his arms. “Can I pray with you for Lacey?”

“And pray for me. I’ve been nervous about telling her.”

They spend a few minutes praying for Lacey. When they are done, she pulls her phone out and calls Lacey and Father turns his talk-show back on.

“What’s up?” Lacey asks when she picks up.

“Lacey, would you like to come to church with me on Sunday?” Amber asks, this time not feeling timid in asking, hoping God will speak to her heart.

“Why do you keep inviting me?” Lacey asks.

The answer was clear. “I want to share with you the most important thing in my life.”

“Wow.” There’s a pause and then some rustling.

“I’ll have to check with my parents.” Lacey begins. “If they say yes, then sure. I’ll do that. And I’ll ask if I can come to Bible Study tomorrow. Candy Crush can wait.”

“Thanks,” Amber smiles and her heart throws out a thanks to God. “I promise, you won’t regret it.” She runs back downstairs, grabs an apple, and finishes listening to the White Horse Inn radio show with Father.

What do you think? Why does Zeff, the Pea-Green Coat Guy, want Amber to visit these dates? Write your predictions below…