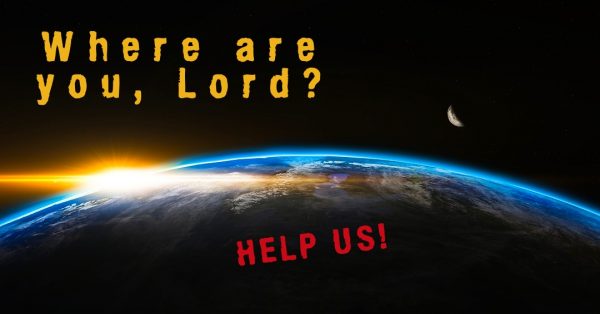 Exodus 3:9 is a strange verse.

Where was God, those 400 years that “finally” he heard, finally he saw? Was he busy on the other end of the universe—perhaps evidence that we are not alone, not so very special? Evidence that God needed 400 years to take care of some alien race, just leaving Abraham’s offspring to do-without?

If you’re like me, you can’t fathom the idea of 400 years of God’s absence. Granted, in Genesis 15:13, he had told Abram (at the beginning of his journey of faith, before even having his name changed) that his offspring would have 400 years of servitude in another land.

It makes for a big puzzle. A Big Question. Why did he leave them alone?

As with any other verse in the Bible, you can’t take it out of context and define what it means alone. Every verse must be interpreted with all the other verses. This is Bible-understanding 101 lesson one.

WHEN HE ISN’T HERE

Can we know where God is when he isn’t HERE?

God is Omnipresent and Omniscient

If I take the wings of the morning
and dwell in the uttermost parts of the sea,

even there your hand shall lead me,
and your right hand shall hold me.

If I say, “Surely the darkness shall cover me,
and the light about me be night,”

even the darkness is not dark to you;
the night is bright as the day,
for darkness is as light with you.

Oops. This idea seems to contradict Exodus 3:9! On the one hand, he tells Moses that “finally” he saw and heard. But here it says he is always seeing and hearing?

The answer is everywhere in Scripture. God was, in fact, not silent for those 400 years.

Knowing God and his ways… it’s not that he didn’t know or see the oppression. In fact, he had just said,

I know their sufferings.

O Lord, you have searched me and known me!
You know when I sit down and when I rise up;
you discern my thoughts from afar.
You search out my path and my lying down
and are acquainted with all my ways.
Even before a word is on my tongue,
behold, O Lord, you know it altogether.
You hem me in, behind and before,
and lay your hand upon me.
Such knowledge is too wonderful for me;
it is high; I cannot attain it.

He is acquainted with all our ways:

God had made a promise to Abraham, he would take care of Abraham’s offspring EVEN WHEN they would be in slavery for 400 years. It’s not that God was absent. It’s that they finally cried to God, not to the circumstances.

EVIDENCE OF HIS VOICE:

2/12 of the spies who went into the promised land had faith. We see there that one-sixth of the mix was holy, a remnant of the faith. Like the reference to 144,000 in the book of Revelation. A small percentage of the whole.

But it was hard! In Egypt they had no Bible, fear of God was spread word-of-mouth. He remained faithful even when they almost had forgotten him. And with no Text, yet, it was very difficult to remember. Very challenging to believe.

In fact, the Egyptians knew they were “different,” and so easily complied and made things difficult for them. The Egyptians were happy to highlight the differences, enabling Israel to remain separate. To remember they were different. To remember where they had come from.

“Silence“ of God is a test, add to that the mass suffering— an act of measuring and weighing of a large group of people.

And yet can God ever be silent?

Similar to the remnant who had faith at the Exodus— how could Simeon or Anna wait, or how could Mary so faithfully agree to bear the Christ-child if there had been silence?

No, God was not silent. He was still working as the still-small voice, encouraging those who loved him, keeping them as a shepherd keeps his sheep.

After the Exile, in the Land of Judah, they had the OT law and prophets. But in them they “merely” had the hope of a Savior.

No, God was not silent.

WISDOM OF THE WISE WAS NOT SILENT

But meanwhile, many PEOPLE were busy filling in the silent-like absence of God’s prophetic voice. People will do that. They’ll fill in the gap with their own ideas, not trying hard to hear a soft voice, they’ll speak louder, gather a crowd, create a platform, work on their brand. Get their name into The Who’s Who of Wise Men.

This is the conflict we see when the Pharisees meet John the Baptist, and then Christ. Not listening to God’s still-small voice, the Pharisees raised their own voices, vied for position as “wise and learned” and declared the wisdom of men in the name of God, untaught by God.

When God is seemingly silent we’ve got to beware of false voices.

And now I picture Anna kissing the cheek of Jesus… Simeon, lifting him up toward God in thanksgiving… Mary reflecting on the beauty of her child… Joseph rushing off to keep him safe. The Wise Men from the east rejoicing exceedingly with great joy, the shepherds rushing off to tell what God had done, the angels singing.

While Herod kills the infants. Two types of groups. Those who hear, those who hate.

Their love is not the result of nine months of a journey from the Annunciation to the Birth of Christ. This is the result of a still small voice drawing them forward into faith for a lifetime. They had been prepared for the moment they heard of the child.

A lifetime of listening to and listening for the “still small voice.”

GOD IS “PROVING” HIS PEOPLE THIS WAY

God, later, shows why he acts the way he does. As they draw away, he allows -consequences to get such that they will eventually call on God, it will force them to choose. Do they still trust him? Do they still know him?

Sure, they didn’t leave “with” their idols, not necessarily. However, while they waited for Moses, the waiting itself provided an opportunity for the Israelites to show their idolatrous hearts.

And sadly, even Aaron had no sword-to-die-on qualms about idols. Up to this point, only word of mouth had brought the message of God wanting his people to have no idols. At that very moment, God was revealing this to Moses. “It should be understood” from the faith of Abraham. Yet still there was no law—everyone did as he saw fit.

SO WHERE WAS GOD?

God was where he always is, where he has been since Creation. He was above “the circle of the Earth,” keeping watch over the sons of man.

He was speaking to the few who would listen. And, he was increasing the heat to prove who was true, who was false. He was sorting and sifting the people. Architect as he is, he was building his Church, getting his People ready for eternity.

Today, we are not starved for God’s word, as they were in Egypt. Having only the hope of a still-small voice, being faithful anyways. Hoping against hope in the promise of Rescue given to Abram hundreds of years earlier. No. We are not starved.

Neither are we like the post-exilic Israel, having the testimony of the Law and the Prophets, limited to hoping for a Savior, as were Simeon, Anna, and Mary. No. We don’t merely have hope.

We, in the modern age, have the still-small voice tied to a complete, thick, amazing, BOOK that teaches us WHO God is, and WHAT he has done through Christ. Our hope in Eternal Salvation has been bound in an historical event. We are not starved. We have a feast of Truth.

And from this feast we draw as we wait, now 2000 years. We wait. We are waiting. Here is a miracle! There are faithful people waiting for the promise. Because of the Resurrection, we wait patiently. Because we have a Book.

How to Hear His Voice

So if you think God is silent, draw close to God. Draw near to his Book, draw near to know him through that completely satisfying Book. You will hear his “still small voice” projected through amplifiers through his Book.

And what will you find about his Silence?

Your suffering is not unseen by God. But it is a test. A “separation filter” that proves who has true faith and who has not. Your faith is proven as faith through those very trials. True Faith has evidence, the sure faith is a life lived in obedience ANYWAYS. Even in the silence.

We hear his voice as we draw near to him in humility and love, in trust of Christ’s salvation, in hope of his soon return.

WRONG SHALL BE RIGHT

The People of Judah awaited rescue from the oppression of Rome.

We await overall oppression from this world. Sickness, sorrow, death. We await freedom from this broken place. We await the return of Christ, who will make all things new. And as we wait, we have a job. Obedience.

This is why we see three images of Judgment Day in Scripture. We see:

Names on the Forehead of God’s people, by their faith

Books Being Opened that Reveal Deeds of Mankind

Sorting of Sheep and Goats by their Good deeds

Faith without works is dead. Trials and blessings prove this faith as surely as fire proves and sifts pure gold from the impurities disguised as gold.

The 400 years of silence, of slavery, of difficulties, were opportunities for God’s people to prove what they loved. A remnant remained faithful.

Are you remaining faithful, even when you think God is silent? Are you hearing his still small voice? He is clearly proclaiming himself to you in Scripture.

We only have to remain faithful in word and deed.

As Francis Schaeffer said, “God is here and he is not silent.”