Facts of the Matter: Hagia Sophia 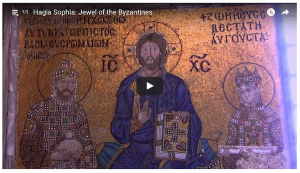 The Hagia Sophia of Theodosius

In Trunk of Scrolls Marcellus, in his most desperate hour, prays in the Church of Holy Wisdom. But before the Nika riots, this was a much different church. It had been rebuilt by Emperor Theodosius in the 400s after another riot destroyed the church Constantine had built in the 300s.

The Nika Rioters burned the church down, as the reader finds out in Trunk of Scrolls. Justinian had it rebuilt it to its current glamour. In the thousands of years since that date, it was turned from a church into a mosque, and from a mosque into a museum.

A Trunk of Scrolls reader has recommended this site for more information: PBS SPECIAL on Hagia Sophia

The Science of Hagia Sophia

Its Architects: Anthemius and Isidore