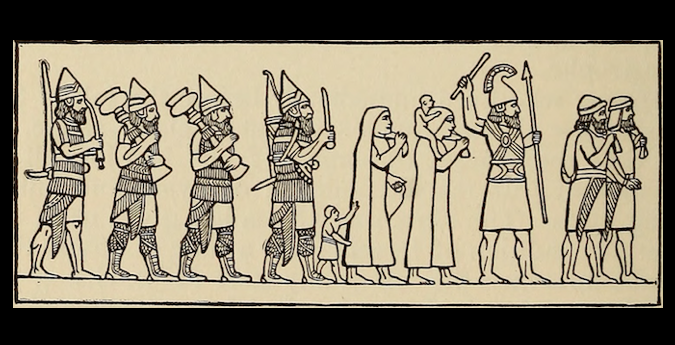 Amos & the Principles of the Prophets, Ch 1-2

“The Lord roars from Zion and utters his voice from Jerusalem…The pastures of the shepherds mourn and the top of Carmel withers” (v 2).

God is not pleased. The Day of Judgment has come…or has it?

In Amos 1 and 2, God shows his righteous character and he warns those who are on the brink of destruction. Using the Principles of the Prophets, Amos instructs Israel how to escape the fires of hell.

But significant to this passage is the Hebrew for this phrase. Each time it occurs it literally says:  I will not turn it back.

Firstly, in this phrase we see the INEVITABILITY of the consequence. It’s not tied to the whims of God. It’s tied to something in a sense beyond God’s ability to control: pure Justice. It must happen that just consequences fall onto Damascus, Gaza, Tyre, Edom, and Ammon, Moab, Judah and Israel.

Each of the judgments has a pattern: God says he will not turn it back, then he states their crime, then he gives the consequence. To Ammon and Moab he gives a longer consequence, most likely because they were the tribes coming from the sons of Lot, and they also knew better.

But to Judah and to Israel the crime section is much different.

First let us look at the crimes of the other nations who are not God’s covenant people. 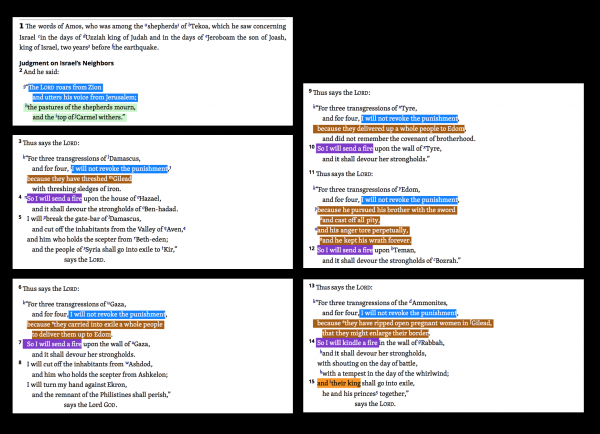 If you just look at the colors you can see that the crimes are brown (Suffering). They have hurt other people.

Damascus: “they have threshed Gilead with threshing sledges of iron“

Gaza: “they have carried into exile a whole people to deliver them up to Edom“

Tyre: “they have delivered up a whole people to Edom, and did not remember the covenant of brotherhood.”

Edom: “he pursued his brother with the sword and cast of all pity, and his anger tore perpetually and he kept his wrath forever.”

Ammon: “they have ripped open pregnant women in Gilead, that they might enlarge their border.”

Moab: “he burned to lime the bones of the king of Edom.”

The Why Behind the Crimes

What do we learn about God’s requirements on the nations from these stated crimes? All men everywhere know to not do certain things.

Romans 1 says, “For the wrath of God is revealed from heaven against all ungodliness and unrighteousness of men, who by their unrighteousness suppress the truth. For what can be known about God is plain to them, because God has shown it to them.

…For his invisible attributes, namely, his eternal power and divine nature, have been clearly perceived, ever since the creation of the world, in the things that have been made. So they are without excuse.” Heavens Declare the glory of God; through conscience and reason we know what God requires.

What do these verses say about the crimes against Israel’s neighbors? Anything against the Character of God will be punished, namely: injustice and lack of compassion and mercy.

The crimes listed show unjust responses in war. “Threshing” Gilead, “carrying into exile a whole people,” “delivering up a whole nation,” “pursuing with a sword,” “casting off all pity,” “ripping open pregnant women,” and “burning to lime the bones of a king.”

The nations were causing suffering upon other human beings.

The last one may surprise you, since cremation is tolerated and even encouraged in many churches today. But Moab’s crime for which they would receive an equally-strict judgment was cremating the remains of an enemy king.

It was dishonoring the body, disregarding essentially the image of God in the man, and actively decimating his physical presence on Earth.

All of these ultimately relate to having a warring spirit.

Why do people fight and war?

Dissatisfaction with their lot.

In modern times NATO countries get involved in wars to “protect our neighbor’s freedom.”  But this was not the case for these cursed nations.

They wanted what the other nations had. They wanted the spoils. They coveted, and were willing to kill and ravage in order to steal it.

The “covenant of brotherhood” mentioned to Tyre was most likely an actual covenant (see Joshua 9), but underlying this is the essential requirement God has laid upon mankind to look out for mankind, irregardless of national boundaries.

“Loving your neighbor” is written on the heart of man, being connected with God’s generosity toward humanity, and so the unloving actions and war instead, deserved irrevocable judgment. 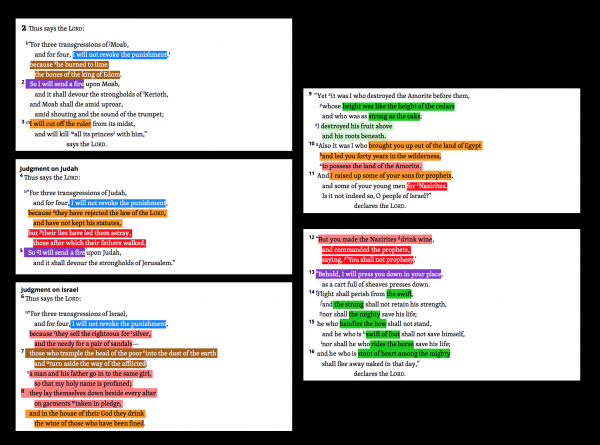 In contrast to the nations’ crimes against natural law, Judah and Israel’s crimes are against God himself, against Covenant. Look at the colors Orange and Red for Judah, and so many other colors for Israel.

Judah: “they have rejected the law of the LORD, and have not kept his statutes.”

Israel “in the house of God they drink the wine of those who have been fined.”

While the nations received a judgment for one or two Brown crimes, those who are supposed to be the People of God get many more crimes.

Judah not only has broken Covenant, she is charged with following the Wisdom of the Wise: “their lies have led them astray, those after which their fathers walked.”

Judah walked after the wisdom of the nations: idolatry.

Israel was lured into different crimes against God.

Israel was far down the path toward degeneration. Just like in the Sower and the Seed parable, Pleasures of this world proved the essence of her heart. Like weeds, Israel allowed pleasures to choke and kill off any love she had for God.

Amos, a prophet from Judah sent to northern Israel, lists for Israel:

c) Causing Suffering on others (v 7) because of  their

Selling the righteous for silver, the needy for sandals. Sexual perversion, contrary to the written Law of God, and trampling “the head of the poor into the dust of the earth.”

The crimes on Israel’s list are so many more than for the other nations. She is about to fall, but hasn’t yet.

The Consequence of Fire

Seven of the consequences upon the eight nations are “fire.”

Damascus: “So I will send a fire.”

But one different consequence stands out:

Israel: “Behold, I will press you down in your place.”

To those who heard this prophecy “Fire” meant they themselves would be attacked.

“You reap what you sow,” is both a lesson Nature teaches us about the plant world, and a right inference about life choices.

The injustice and hatred the nations reaped would come back on them when the  “bigger fish” came their way to swallow them. Their own towns would meet that injustice by the next guy.

Fire is a universal fear. And fire is also a common symbol God uses in Scripture to reflect his hatred of sin. It brings to mind the verse in Isaiah:

God is a consuming fire, he will eternally burn up the unjust and wicked.

“Who among us can dwell…?” Is a right question. Sinners and the godless do right to tremble. The eternal soul knows it will face judgment upon death, and this eternal fire is one that must be faced.

So the warning of fire to the nations and Judah also warns of the finality of hell-fire.

But Amos was a prophet from Judah but sent to preach to Israel during the reign of Jeroboam II.

Israel has no fire promised, yet. They will be pressed down.

Verses 14-16 list the measurable strength a kingdom might trust in. Then it shows that these “strong things” are nothing against the measure of justice on its way from God.

“Pressing down” brings to mind the Alpha of pack animals establishing dominance toward those challenging it. This “opportunity to stay in the pack by submission” is a theme you will see in the upcoming chapters.

Israel still has a chance. They have time to repent and return (Up is Down). This is the message of Amos, as we will see in the next chapter.

The Principles of the Prophets are clear in Amos’s teaching, almost all of them found in the first chapter. As we read on we will see them listed and expounded on even clearer.