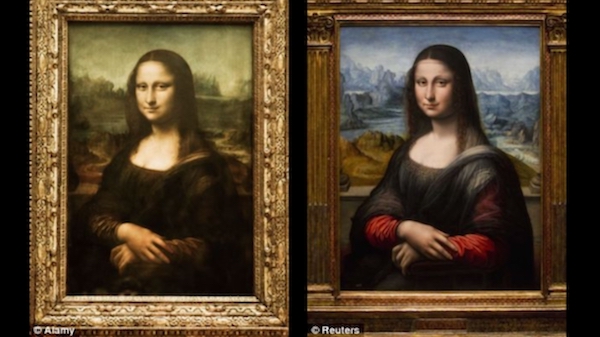 I learned today, in this article and some other related research, that a second Mona Lisa painting is suspected of being another side of a 3D experience. If anyone could pull this off, it would be Leonardo DaVinci. I focused my eyes between these two pictures and was able to see a 3D image. See if you can do it.

Now, focus on the middle of this combination. Focus, force your eyes to see both at once, and see the 3D version.

That he did it is speculated, since there are historical documents confirming two different Mona Lisas, and the “unfinished” nature of the most famous one is also curious.

How he did it:
It is suggested that he initially painted both simultaneously:

Hint: If you can’t warp the picture to 3d with your eyes, make the picture smaller until you can.

This may or may not be directly related to Tim Reynolds: Time Detective.

Let me know what you think.